How to Get What You Really Want

Had to share some pics of taking the kids to meet Santa today at the Blue Genie Art Bazaar. More about that later, it's a fun funky"Austin" thing. Despite that my kid are 6 and 3, I think this was on of the only times they ever met Santa, we have one pic of Jonathan when he was two and he got so scared he never wanted to do it again. Same for William every season we see them at the mall, they get these eyes and run the other way! Maybe the welcoming "weirdness" of this place made them feel at home! 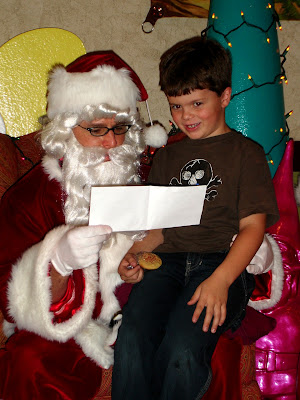 Anyway, Jonathan declared last week he no longer believes in Santa("because there is no way he could do all those houses in one night"), but it is always a good idea to make a list,just in case. Today he took the meet up and brought a list he made from the Brookstoen catalog, complete with prices (ouch!), and was thoughtful enough to bring Santa a cookie (call it a "thoughtful gesture" or "bribe", either way, I thought that was cute!) 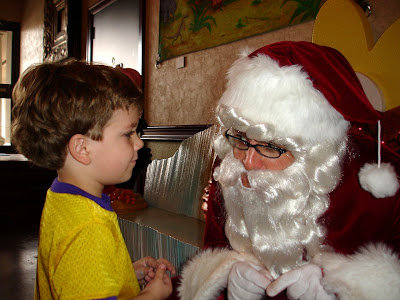 William dressed himself for the big event and moussed his hair because he wanted to "look nice for Santa". He was too shy to sit in his lap however, but Santa coaxed him to whisper one thing ("Martian Matter"-which, Santa had never heard of)
He was not too shy to hop on this frog, though!! (why they have a rooster, frog, and ginormous sushi roll sculptures you could climb next to the Santa Meet & Greet I haven't a clue! but it sure was fun!) 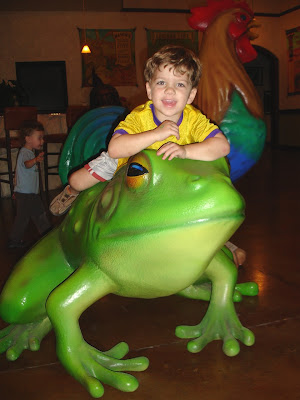