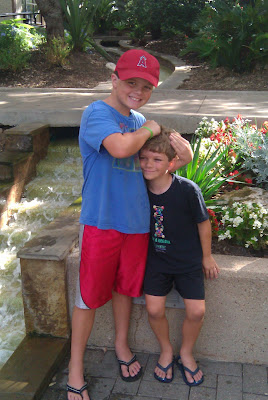 If you could please pray that Jonathan swims well this weekend at the city meet, I would so appreciate it! If he finishes in the top three spots in either of his two events, 25 meter freestyle and breaststroke, he'll qualify for the state finals in Waco in a couple week. This would be a really big deal as we have only done swim team over the summer each year, so he doesn't get to swim year round like some other teams do (but we might sign him up to do that soon) He's also been swimming in an 8 and under age category since he started swim team a few years ago, so it was hard to place against kids so much older. Now that he's at the top of his age bracket he has been doing great, he won 10 first place ribbons and two second places this summer and this is the first year we decided to go ahead and sign him up to do the city meet. Of course, we have told him how proud we'll be no matter what and to focus on getting personal bests for his swim times and have fun swimming in pool where Olympians have competed! It will be a great experience for him swimming in that beautiful swim Center at UT and getting to watch from the stands indoors, all the previous swim meets, we've been out in the hot sun!


Here is a little video I took on my phone of a particularly exciting race from a few weeks back, 50 freestyle, I regret now we didn't sign him up to swim this event at city (you get to choose) since he had such a huge lead, he came in first, is in the lane on the far right in front of where I am shooting, please pardon my loud cheering! (I about had heart attack when he stopped at the wall for a second to watch everyone come in, but turned out it didn't matter, hee hee!) :) (Sorry if you can't view the video, I can see it okay when I open it!)

UPDATE: I just found out they may be able to add a third event for him, AND just saw the swim sheet, Jonathan is in first in the city for all his times going to into the meet against all the kids signed up, squeal! So exciting!)

I've had some requests for how I made the card in our hop with the circles using Theresa's new set "Whimsical Wishes," so I will try to get a tutorial posted of that for you soon. Will update you about the meet also, of course thanks for praying! I hope you are having a terrific summer!
Crafted with YOU in mind by Melanie at 7/13/2011 07:59:00 AM