Hope you all had a wonderful weekend and had a wonderful time being spoiled or a Mother/mother figure to enjoy spoiling if it was Mother's Day n your part of the world! We had a busy weekend and the I got to go the spa with a friend on Sunday, using a gift certificate I got for Christmas. Returned home to a nice surf and turf dinner cooked by hubby and some letters from my kids. Here is Jonathan's: 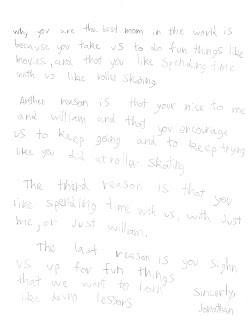 We went skating together for the first time on Saturday, just the two of us. He'd never been on roller skates before and he did great!! By the way, this rink is super old school, if not for the current music, I would think I was back in 1982!! Loved when they played some flashback stuff, it really brought back the memories!
I'm glad to have a skating buddy, I love to skate. Here is going down low during the "Cha Cha Slide". 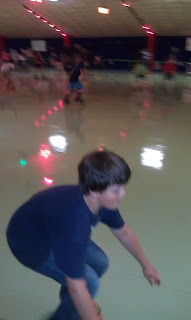 He also bought me a big mug full of peppermints and origami flowers at the craft fair I did the previous week with money he earned helping me at my booth. (I forgot to take a pic of that, but they will last forever and he was very resourceful and came home and found a video on YouTube so he could make more himself to add to the bouquet! :) BTW, here is a photo of us he and me there together with Christine Monzingo, who dropped by my table with a friend and her copy of my book to sign! What a great pic of us! Fun! (Yep, he'll be taller than I am in two years) 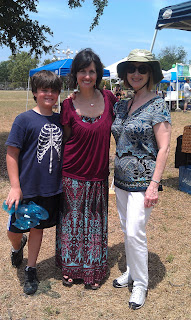 And here is William's letter: 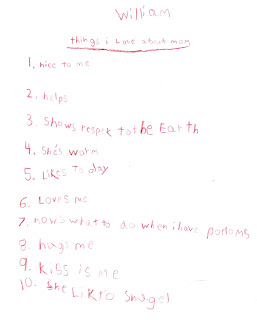 Most were expected, as he lists these often, but I especially enjoyed #7 (translated: know what to do when I have problems") Well, I''m so glad he feels that way! My older son asked when I read it, "What do you mean, William?! Like find the peanut butter??" "No, I know what William meant. Don't I, William?" Mmmhmm, he nodded (I learned over and whispered, "Like secrets?" "Yes". William often comes in my room and we have private conversations about things going on with him. This is really bittersweet knowing when he's struggling but I am so thankful he confides in me and feels peace that we've resolved whatever issues he's having together. And how cute is #3? ("shows respect for the earth") well, let's not tell him about when I forget to bring my reusable bags in form the car at the grocery store! I guess he can tell i love nature by the time we spend hiking and how I take care of our rabbits. (BTW, I really need to shoot a rabbit video for you, if you've never had rabbits, you just wouldn't believe the incredible moves they bust out when given some time to run around in a big area!!) 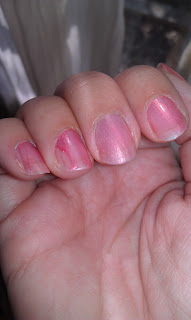 William's gift was painting my nails for me, was his idea and he used polish he bought for me last year, does that boy take care of me or what? Never mind that he *pushed* the polish on starting from the tip and going toward the nail bed, pooling all over my cuticle, I didn't see him becoming a nail tech when he grows up anyway! ;) 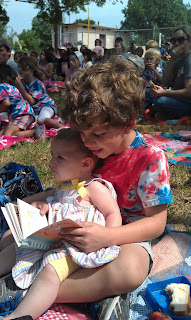 Here is a recent picture of him reading to a friend's little girl at a picnic. He and Jonathan have both recently announced they want a baby sister....hmmm!