Quick update! I am stamping like mad for our release TOMORROW, but here are a few pics and and info about the swim meet! Jonathan finished fourth place in both his events at the Summer Games of Texas in Waco this past weekend, with personal best times in each! My boy!! Only first, second and third place go to nationals, so unless someone drops out, he won't be heading for nationals this year. He looks pretty okay with that though posing with his ribbons, doesn't he? :) 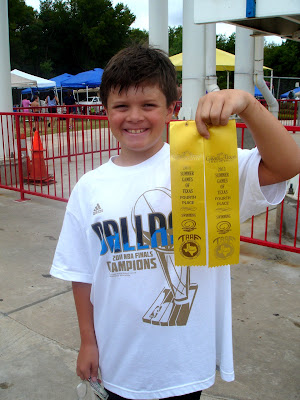 Here he is getting ready for his 50 yard, freestyle, his first event. Love the laser-like focus he seems to have here! He managed to take 2.34 seconds off his time from the city meet, coming in at 36.79. 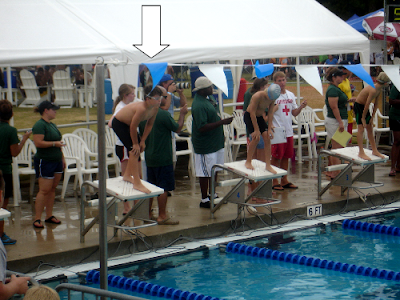 Here is the finish of his 25 yard freestyle. Oooh, it was soooooo close, I cheered myself silly! It really looked like all the three of the top finishers in his heat came in at once, Jonathan finished at 16.89, (his previous best time was 17.07). I thought he came in third looking at the results from that heat on the scoreboard, which was the final heat of that event and had all the fastest swimmers, but it turned out one boy from the previous heat came in even faster than any of these kids and took first. Jonathan ended up just .08 second from coming in third to qualify (and only .23 from 1st). 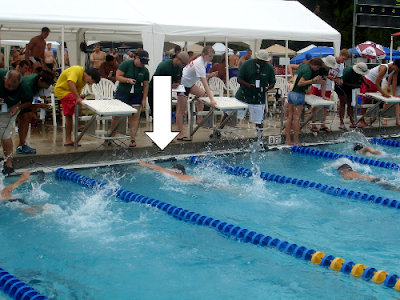 We couldn't have been any happier with how he did, I am still just amazed at how strong a swimmer he is and how much he improved his times from meet to meet all summer long. I only would have been disappointed if his goggles came off or he fell off at the start, you know, something like that* which would have really hurt his time and been something he would have regretted happening and that kept him from performing as well as he wanted, that's all I was hoping and praying for, for him to have fun and do well, feel his hard work had paid off! Not qualifying for nationals at this point I think is really a blessing, he has a goal to work towards now and I just don't think he is old enough or ready for that pressure, he has been pretty stressed with the meet coming up these past couple weeks never having done anything like this before. 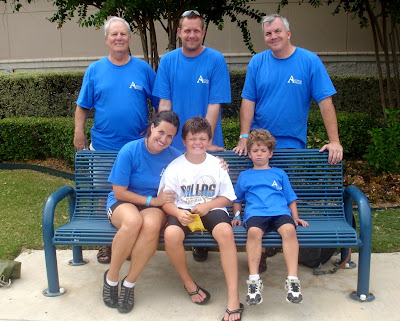 Here is the crew at the meet, we're all wearing our team T-shirts (except for Jonathan in the middle holding his ribbons, my stepdad gave him a Mavericks Championship shirt that morning so he was eager to try it out!) From left to right: Me, Jonathan, William, (ready to eat!) back row stepfather, my brother (who took off work to come to the meet!) and my husband. By the way, all three of them are named Paul, can you believe??) My mom is taking the photo, "Grammy" was there too!

So anyway, thank you again for praying! We had a great weekend! Although Jonathan seemed to be a little relieved he didn't qualify after it was over, now that he's had time to reflect he's really hoping he might get to be an alternate at nationals next summer (which may be just because we heard it's going to be in Hershey , PA, chocolate factory here we come??!), we'll see, Lord willing, it will work out! I'm just looking forward to him hopefully making it to state again next year, it's going to be in Corpus Christi, can you believe I've lived in Texas my whole life and never been there?)

Thanks for reading and letting me share! See you back here tomorrow morning at 8 AM CST for a card using my new set and an official invite to our party tomorrow night, starts at 7PM CST, hope you can make it!!

*Okay, one thing did threaten to ruin the meet: remember the tattoo I mentioned him wanting me to draw? Well, it looked awesome, a goggle-wearing salamander just like on the shirt and SALAMANDER in bubble letters going all the way up to his knee in different colored Sharpies, (it is the first time he'd ever had anything written /drawn on him for any of his meets, and when we arrived for warmups one of the coaches got mad and said any writing on a swimmer's body was not permitted at the meet and grounds for disqualification, yikes, I had no idea, swimmers had been doing it all season at the neighborhood meets!!! It really rattled him, we got it off with baby oil, but it took several minutes of scrubbing! I am so glad he was able to shake off the worry about that and still swim fast! It all worked out! :)