The People Under the Bridge

Just want to share what's going on in William's world! He started second grade. Here is a pic of him on our front porch before we left. I think he would have also let me take a picture in front of the school like in years past, but since Jonathan is too cool for it, William is, too. He also joined cub scouts again. By default, I am the wolf cub den leader. Heaven help me. Popcorn sales have begun. He is eager to get selling for the pack. 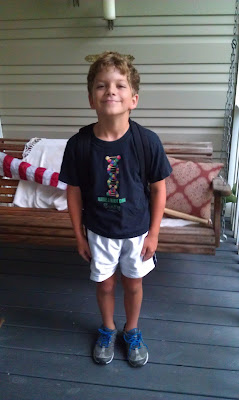 I was very proud of him a few weeks ago, before he even made the decision to return to scouting, he was already thinking of doing "a good turn". You see, he worries a lot about the people he sees panhandling while we are out driving, and prays and asks questions about "the people under the bridge". He often tells me he feels a lot of guilt when he cleans his room, as he picks up the many things he has and that he feels badly about how little they have. "If I could have one wish in life" he said, " it's that all the people who are homeless would be rich."

His concerns for the homeless have been around for a long time, but over the summer our church did a ministry for the homeless down town "Church Under the Bridge" . Children weren't allowed to go because it was a rough area and some of the people there could potentially be dangerous. We had to explain in a way he could understand that some people are there because of their circumstances, but some are ill or have had made choices that have led to them losing their families and homes, but that God loves them all, and we are called to pray for them and help them however we can. We were able to buy and collect a lot of supplies to donate. (They actually did this the Sunday we were out of town for the State meet, but I hear it went really well) 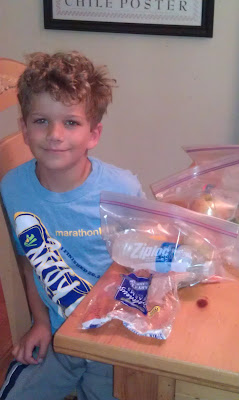 Anyway, to get to what he did! One morning he told me he thought they would like some fruit, granola bars and water, so we went to the store and got some stuff to pack up in gallon Ziplocs bags. The day we headed out we weren't seeing people at many of the usual corners so we prayed, "God, we have four bags, please help us find four people that need these." And shortly after, we did. I'm just so proud of his compassion and acting on his concerns instead of worrying about them or leaving it to someone else to do something about. It was a very hot day and their gratitude for the water and food they could have right then and there was evident. He was shy about handing out the bags through the car window, but he said it made his heart happy. "God bless you, young man!" they would say, and he'd giggle and say, "God bless you" back. "Mama, tonight they're all going to get together and have a feast!" he told us on the way home. (Well, not sure about the "feast", but he was so hopeful their day would be easier and more comfortable.) Thank you for reading! I had to post because it's something I never want to forget, and encourage you if you have a child who asks about the homeless this is very doable safe way to go about helping other than giving money.

I thank God all the time that William cares so much about others and pray he never loses this gift. Whether service is part of his career or just something he chooses to do on the side, I think it will always be a big part of who he is. We named him William after my husband's father, and I'd always read it meant "Conqueror", which to me always had a kind of a dark undertone, but in my Bible Study a few years ago, they gave us a print out of the meanings of all the names in our family and his was "Determined Protector". I love that. William is a warrior for Christ.

I am so behind on posting here because of school, the kids sports and activities, and enormous projects coming out, and quite a bit or re-org round the house, but am very excited about our new Gina K Designs new release and party on September 20th, plus a special hop with the Center Stage Spotlight Alumni team on the 21st! Hope your school year is off to an excellent start, and I hope to get caught up soon! Hugs, miss you!