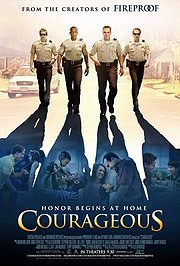 Highly recommended: Our church The Quarries sponsored a dinner and movie outing for as many people who wanted to go to see the new film Courageous on it's opening night this past Friday. Wow, I was SO impressed with it! It has everything: comedy, drama, inspiration and yes, even ACTION! I strongly encourage you all to see it and tell others about it. I also recommend tissues, there were lots of moments I cried, but just as many that had me laughing out loud, and while several parts are very convicting, it is NOT a downer. Favorite characters were Adam, Nate, and Javier, they brought a lot of humor and emotion to this film. It has a PG-13 rating, for some police action, gang violence and drugs (no usage, but appears as confiscated evidence), plus heavier issues like death that are mature for young children, however there is no bad language. I would recommend this for older children and teenagers, mine are too young now, but I will definitely be purchasing it when it comes out on DVD so they can see it in a few years. It will definitely be the start of a good conversation with them for what I want for our family and their lives.

I was also very impressed with Alex Kendrick, one of the stars of the film (Adam) who also wrote and directed (and edited, etc, what hat doesn't he wear in the production of this film when I started reading more about it) with his brother, what talent and vision! I pray their ministry of reaching out to people with films continues to flourish and be blessed.

I have to say I am very disappointed to read the many negative reviews about it, that seem more like personal attacks against Christian values rather than of the storytelling and production itself. Please don't let those reviews discourage you from seeing it so you can make up your own mind, the production value was great. It won't win any Academy Awards, has no big stars or the big budget audiences have gotten used to seeing (which typically veils a poor plot), but I thought the writing was very good and the characters were very believable. It dealt with MANY issues we ALL may one day (soon) face, and it's important to think about how you would respond to them. I'm sure you'll recognize some of the stories and heartaches from your own life or people you know.

Now I usually like to keep my money in my pocket until I know what the the critics are saying, unfortunately in this case the overall consensus on rottentomatoes.com is that: "While the production value is fairly competent, Courageous is overall worthless to anybody who doesn't subscribe to its dogmatic views." "Worthless"? Really? Spend time with your kids? Model good behavior and ethics? Ask your daughter to wait for a man who'll respect and cherish her? I don't think you need to be a Christian to agree these might have some worth. To me, the anger and criticism of this film is very telling that there is an agenda against anything that has a message of purity or hope, because these are not the kind of stories Hollywood wants to make, but really how many doomsday movies we need? What's wrong with wanting a film to have a positive effect on your life instead of entertaining you for two hours that you won't remember the moment you walk out of the theater? I'll admit, some of the characters may do things that in this day and age seem unbelievable, but I think that is just because we are all getting so used to seeing people in the media doing the wrong thing, or, nothing. But I believed it, perhaps they weren't common choices, but possible and remarkable ones, because I know there are many unsung heroes in this country who respond this way and my response was, "Wow. That takes GUTS, and that's AWESOME!"

Please help support this film, it came in 4th for weekend box office totals at $9.1 million (whereas big blockbusters like Dolphin Tale, The Lion King, Moneyball were the top 3, bringing in $13.6 to 10.9 million, not so much above what Courageous did, but Courageous was the #1 opening film.*) That tells me there are plenty of people who feel it has "worth". Another review said that it "preaches to the choir", and while they meant that as a negative I have to agree with it, because Christians need this message of encouragement, the point is not just to evangelize. I think it's really important that it does well to show Hollywood that people want to see films with a message of hope and positive role models and lifestyles, rather than glorifying violence, casual affairs, divorce, etc. I truly believe that if more families could make even some of the changes the characters do in this film, of holding friends accountable, praying together and for each other, focusing on family relationships and taking more responsibility in the Godly training up of our children, it could turn around most of the world's problems within a generation. I'm serious!

Please make a date this weekend to go see Courageous (I just may go see it again too since my ticket was paid for the first time), I believe you'll be blessed by it and would be a great one to discuss with a friend, family member or significant other afterwards. I also welcome you to come back here and give me your opinion of it. (You can tell me if you think it stunk, I can take it!) :-) Love it or hate it, it WILL make you think and reflect.