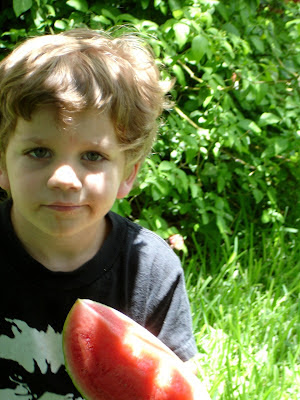 Thank you everyone who left some advice or encouraging words about William's nose! I am happy to report he has gone almost 4 weeks without incident!! I'm praying it was just a passing phase(over a 5 week period), but we'll see... should it happen again, I believe we will make a trip to the doctor rather than me getting it out myself if only to impress upon him how serious and unpleasant it is/could BE if he keeps it up(that's what I'd had in mind and several of you suggesting it as well, made me think that was a really good idea!!! When I'd talked with his pediatrician before, she'd told me it would smell terrible if there was anything still inside(again, as many of you mentioned) and fortunately we never had that happen which is why we never went to the doc. Unfortunately, his interest seems to have shifted to some different body parts, but we're dealing with it LOL!
Hope you're enjoying your summer! Above is "the W"* enjoying a quarter of the cutest little "Personal Watermelons" I found at the store the other day, $2.99 and seedless (smaller than the regular seedless ones you see that are basketball sized, these are like a big cantaloupe, so easy to cut up and none going to waste, thumbs up!) I call this pic "Williamelon" hee hee!!
I'm in the middle typing up a post for a really cool trifold, it has about a billion pics to upload, sigh!!! I'm working on it, shouldn't be too much longer!
*Good thing for me it looks artsy to have your subject off center, William can rarely be caught in the middle of the frame, he's off like a flash and we're lucky if we catch a tiny sliver of him!!!
Crafted with YOU in mind by Melanie at 7/13/2008 05:30:00 PM