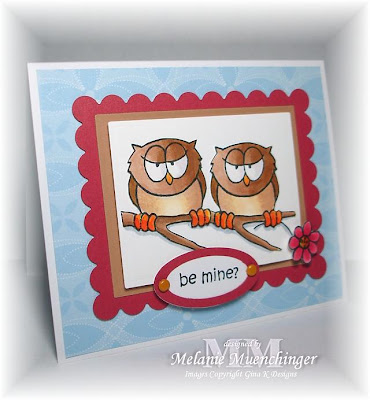 When you stamp out the owl from "Framed Friends" twice you can trim out just the owl on its perch and place the branch ends together to extend the limb. I colored the image with Copics and added a little hand-drawn stem for the popped up flower. I love the expression they have, like an old married couple, I think of the joke about how people start to look alike LOL! I "broke tradition" and just used two colors that were a nice compliment and contrast to the brown and orange rather than matching it all up: SU! Ruby Red and Bliss Blue DP. (There is also a layer of Creamy Caramel that ties in their little bellies.) The red is nice with these warm tones (I chose to make this layer scalloped to go with red petals on the flower) and the blue is tied in with a very pale blue Copic shadow under the image. Sentiment is framed up in SU! oval punches.

No, this is not one of the promised tutorials, but a post I had saved, thankful to have it, William is very clingy today (and it's raining out, perfect snuggle weather) so I'm trying to give him lots of attention. Hopefully I will have one up tonight!
Crafted with YOU in mind by Melanie at 2/09/2009 09:20:00 AM