My son Jonathan loves to wear a little "pirate" 'do rag on occasion, especially in the summer. When I saw the new Kindred Greetings for kids set, I had an idea for personalizing his bandanna with all these loving, kid-friendly affirmations! "You can do it!" You're Awesome!" " I love how hard you try!" "You're such a team player!" "I'm so glad you're mine!"* on an on! Aren't these the best sentiments?! (I don't know why nobody ever thought of a set like this before!) The font is really great, too, not just because it's cute and looks handwritten, but because it's so easy for younger children to read on their own, which they love being able to do. 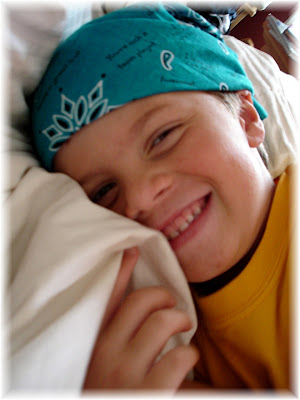 The black details on the bandanna make my stamping fit right in! I let him pick out the color bandanna he wanted (with a little guidance just to make sure it wasn't too dark or busy a pattern to be able to read the stamping). Fold your bandanna in half corner to corner so you have a triangle. (You could stamp the whole bandanna, but I chose to stamp this top triangle half and leave the underside blank, for days when he wants to go "greetingless"* he can flip it over, still folded!) Be sure to insert a piece of paper or CS to keep your ink from going to the other side. I used Palette Noir, which is a hybrid ink you can use on fabric. I put most of them going one way("right side up", so that someone standing in front of him can read it ) but at different angles, filling in the spaces where there was no pattern in the print. Throw it in the dryer for a few minutes to heat set the ink afterwards. (the pic looks a bit blurry, but the ink is not, I just couldn't get my camera to focus properly on all the greetings, sorry!) 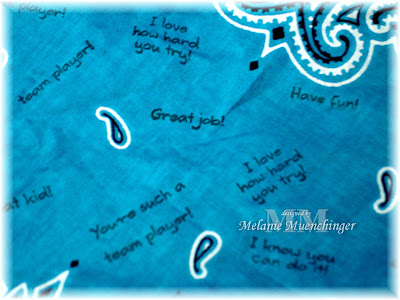 If his friends or family then want to add to this and sign his bandanna with a Sharpie, it would blend right in, isn't that fun? These would be such great gifts for end of school or end of the season sports parties, or even party favors! (Wouldn't they also be awesome for children undergoing chemo or who have experienced hair loss?) This took literally 2 minutes to make and it cost less than a dollar! I gave this to Jonathan when he graduated from his swim class this past week, and I think he's very proud of it (strutting around like he was awarded a medal!) ;) ("oh yeah, OH YEAH...!")

* because he's already getting too be a teensy bit too cool for his mom on occasion (now that he's a first grader) I purposely left off the "No matter how big you get you'll always be my baby!" stamp! Although this stamp will get a LOT of use (because I know he would be really pleased to read that in a card privately), he's at a stage he would not want that on his head for all the world to see!
Crafted with YOU in mind by Melanie at 6/24/2008 06:00:00 PM