LOL! I found a thread on Splitcoast of a fun swap arranged for the tees!( naughty group, funny group, etc I love it!!) and I noticed several comments from stampers trying to decide how to cut up their sets that just arrived! Thought I should come post a pic of how I did mine along with some tips and the why behind some of my choices, there are other ways to do this, of course...

I just can't seem to make a set without giving you as many images as I'm able!! (We play around with the images lot before plating to figure out how I can cram more ideas in, cost per stamp just keeps going down that way! ;)) I was able to get the whole set done with my Tonic scissors, but if there is an area you're nervous to cut, grab a hobby blade to make a precise incision directly between the stamps. Like in most of my unmounted Gina K sets, I find lots of opportunities to cut a single greeting into parts where it makes sense to do so, to allow for different stacking configurations, using just part of the greetings instead of omitting, or substituting another word from the set to make new greetings. For example: "have a nice day" can become "have a "super" day", or "have a super birthday", etc... *(see pic below) 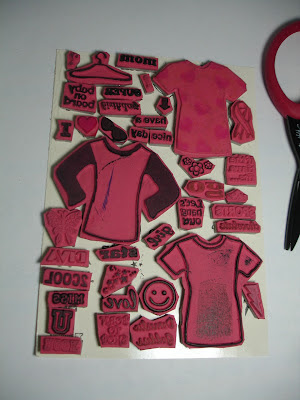 Also notice the I heart are trimmed apart (because I love using the heart by itself!) but I left a straight line at the top left between the two so that when I want to use them together i just line them back up and it's straight and spaced correctly...

The MISS U ROCK have all been trimmed apart, but instead of making as close a trim around each as I could, just one snip in between each word allows me to stack it so they line up exactly, perfectly straight. in the pic below, there is no space between 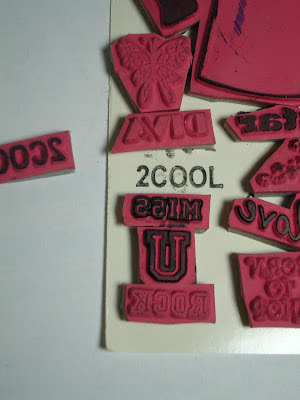 and here you can see I peeled them off separately. I also took off a few to show I have a whole stamped image sheet to keep me from losing any rubber, inking up the whole uncut sheet before you trim and smacking it to the sheet is the easiest, but of course you can do it later. (Doing it before you only ink one time, ensures everything fits, and that it matches your image sheet on the front packaging.) Since I started doing this I am pleased to report I've never lost an unmounted stamp yet! It also keeps me really organized/my desk cleaner because I tend to use lots of different images at once, (work on several projects at once!), and before when I just stuck them to a blank cling sheet, I would end up with all my stamps on the desk and wouldn't even realized if something was unaccounted for! Now that every image "has a place" I tend to put them back on right away...) 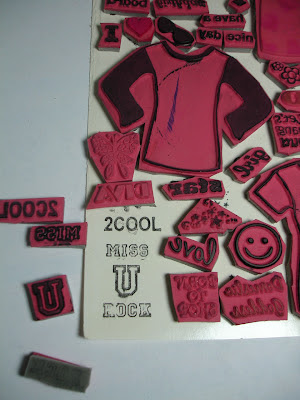