Celebrate someone's birthday with a sweet little cupcake ("Square Pegs"), it looks so sweet and innocent... 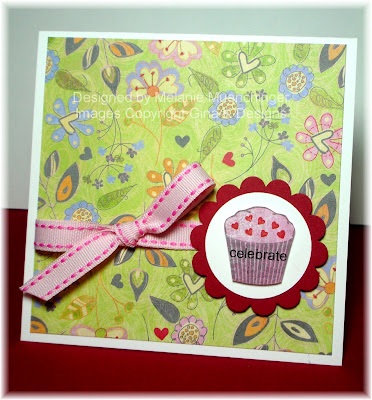 and then show them all the "trouble" you went through to make it! bwahhhhhhhhhhhhhh! 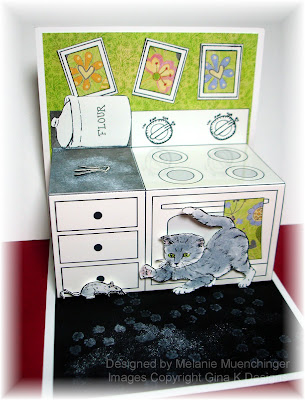 I'd been thinking how fun it would be to have these two battling it out in the kitchen but hadn't gotten around to it. I used my Perfect Pattern Pop Up Oven template printed on glossy cardstock and added Theresa's kitten and Mouse from "Purrr-fectly Delightful". I added a flour crock and dials from "Have a Cookie" and upended the jar, sponging Cream White directly onto the floor and countertop, as well as stamping the pawprints. DP is Basic Grey Sugar Rush, I framed up a few little flowers from another print in the pack with the picture frame fom "Tech Talk" and "hung" a couple askew, like they've been all over those counters! ( I know some of you are laughing while others totally have the willies right now!) I didn't mean to use this many sets, but once I started I couldn't stop, ya know? )*

Well. I'm sure you've all heard the saying "when the cats away, the mice do play"? As luck would have it, while I put the finishing touches on this card, I thought my kids were resting in their beds (where I'd sent them after being too rowdy playing when they were supposed to be home from school sick, and they are sick, but apparently not that sick!) but instead they got up and into a bottle of Super Glue my husband left out over the weekend....(dramatic music here) I will never know exactly what happened, as both their stories are very different and fault the other, but my 4 year old's arms were completely covered in glue (looked like long, ropy burn victim scars) and he had a 9 volt battery stuck to his mouth. My older son had it on the tips of his fingers but is still holding out that he was nowhere near the glue. Hmmph. After two hours of bath and scrubbing William threw up in his bed, and I got to change the sheets on his top bunk bed, one of my least fave chores. woo.hoo. It was quite a "sick" day here, let me tell you. Hope your day went better than mine!


*I totally could have gone further and had the cat outnumbered by an army of mice, one half in half out the jar, etc but didn't want to freak anyone out, based on a few release party comments I think there may be some musophobes reading (afraid of mice, had to look that one up!)
Crafted with YOU in mind by Melanie at 2/01/2010 10:00:00 PM