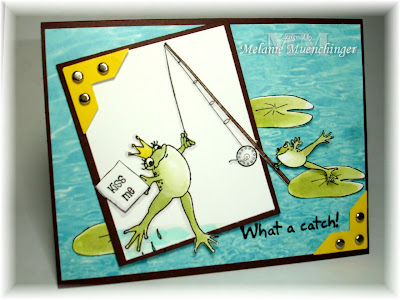 I was so excited to see Rupa's "What a catch!" phrase and fishing pole in her new set because they were just what I need to create this! (I'd been wondering what I would do with the pool background from my DCVW adhesive mat pack, until now!) I submitted this for the SCS challenge this week, which was to do cut outs,( something I try to do an almost every card, actually!) The larger frog is NOT cut out, I just stamped him at the end of the line (all shadowed with a warm gray 20% Prismacolor marker) and then cut my mat smaller than the image so his foot and the end of the pole would be sticking out. The little frog (on a dimensional)and lily pads are obviously! I still needed a little something and I wanted to bring out the yellow in his crown so I added the corner punches on either side to balance it out, and the brads to give it some bling and tone down the yellow. The little "kiss me" sign was cut out as well(you knew it went with the crown, right? Frog Prince was always one or my faves... :)

More later, there's a super scary storm out, gotta go snuggle and drink cocoa with the kiddos! (while DH makes Sunday pancakes) :) But I have some contest stuff to announce, RAKS to share, new tutorial etc etc!
Crafted with YOU in mind by Melanie at 4/27/2008 07:27:00 AM