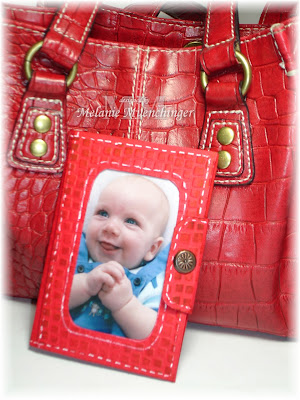 That's my bag, baby!* (I love carrying around a little red purse(I've actually got a big one, too!) why carry black** when you could carry RED?? ) I told you I'd come back with a ladies wallet, and was going to make a wallet to match Elle's grill ,but then I remembered I'd been meaning to make a new little holder for my business cards, so I decided to make one to match my favorite purse instead. I LOVE how this photo window turned out using the label stamp from "What's in Your Tin? 1"! It was a very simple addition to the wallet project(and allows you to change out the pics instead of committing to a few that are glued down...!) I can also see how changing it up slightly could make really cool luggage tags! ;)

First, assemble the "w" part of the wallet as described in this post. Next I needed to make my window layer, this piece (Real Red) is 4 1/4" by 2 3/4", slightly smaller than the width of the front of your wallet. I stamped my narrowest label border on the cardstock AFTER embossing(this CB folder is "Mesh", the irregular shapes and sizes are a great match for this bag!) Look how the little embossed squares divided up the thin borders into near perfect stitched lines for me!! 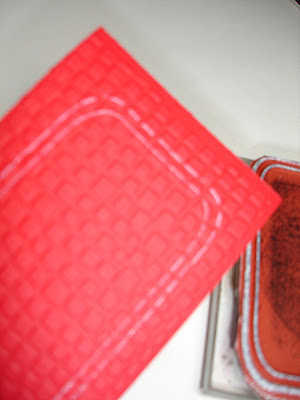 Then I cut out the middle of the border with my hobby blade. Save the cut out, you'll be using the whole piece later! :) 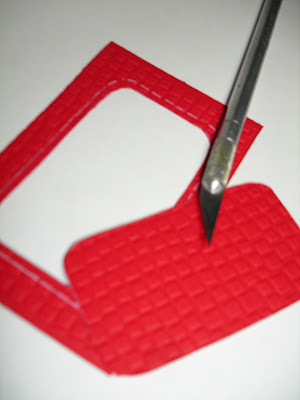 I flipped my window over and added a piece of acetate slightly smaller than the the piece of CS, then put terrifically Tacky Tape around three edges only , the long edge that will run along the wallet fold stays open so you can slide your photos, ID or business cards in and out! :) 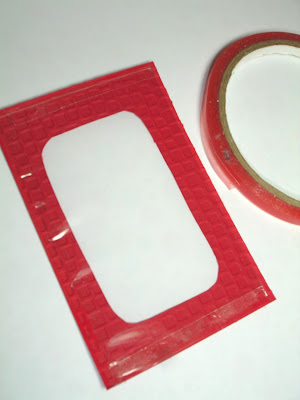 Here is the assembled wallet, all "stitched" up(with my Signo white gel pen) and ready to go! See the folded little tab on the side...? 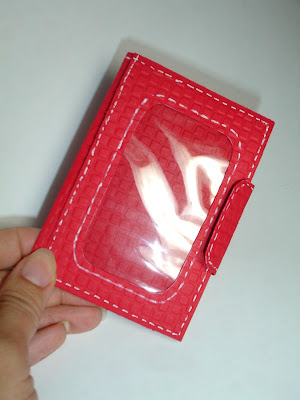 It's that cut out piece, I didn't have to cut it down change the shape at all! Instead of scoring I just wrapped it with my fingers around the wallet and pressed. I attached it with tacky tape again on the back side. The big antiqued brad only goes through the tab layer, so it won't show inside the wallet. it stays closed pretty well just folded around but I may go buy some little magnet closures so it snaps together. 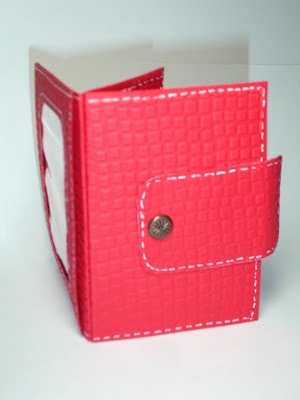 And here you can see how it wrap around and the inside. I added another brad to look like a snap closure, but I cut off the prongs with my craft and rubber scissors and attached it with a glue dot so you wouldn't see them when you open it. 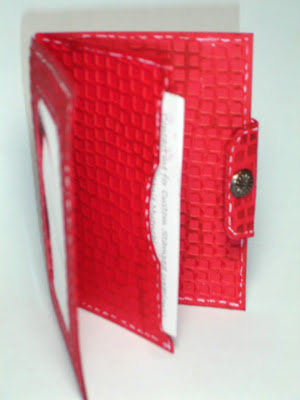 And last you can see the red CS doesn't look as "flat" as before. I rubbed my Ruby Red pad all over it so the embossing would have some depth and distressing. 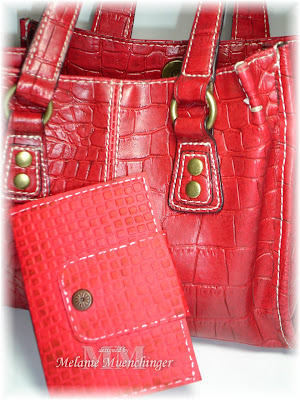 Now, what would have been SO much better: inking my CB folder in a deep red before running it through for the negative Cuttlebug effect! (smacking head, shows what a hurry to post and no planning gets ya!)This would have been an even closer match to the bag...oh well! next time! I may go try to kick it up an extra notch by adding another window to the back and or the inside as well as either apply some Crystal Effects or swipe my Versamark pad over the texture and some clear embossing powder to give it a shine like my bag...or I might not! it's the weekend! ;)
have agood one, don't forget to enter for the earrings or blog candy!

*one of them, at least, I remember when my Z Becky Brown arrived last year and I showed my DH saying,"Sweetheart, I'll never have to buy another purse again!" He just looked at me and said, "Mmhmm. I've heard that before"

Labels: Gina K Designs, Tutorial, What's in Your Tin? 1 and 2