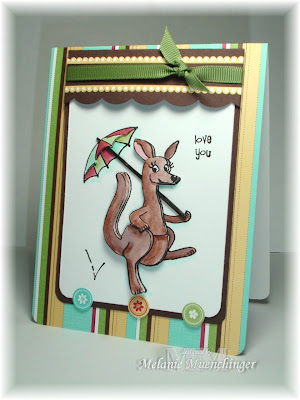 Good grief, I just stamped and cut out THREE kangaroos! This was definitely more time that I like to spend on a card, but it was worth it because I have something to post and completed two challenges in the process: this week's technique challenge for SCS, (TLC162) and the Gina K Designs sponsored Sketch of the Week at Card Positioning Systems. (CPS58) Edited to add: Boy do I feel like a dork, I was supposed to use Spring Blooms for the sketch!! back to the drawing board!

The technique this week was paper tole, where you cut out one image into several layers and mount to give a 3-d effect, but you could not do a flower (which is most typical of tole). Well, if you've seen my gallery, you already know I've given this technique a workout with the hippo (very easy cutting!)and giraffe (not so easy cutting!) but I had not yet tried it with a hoppy! Doing three layers here I found rather tedious(because you have to color the ones UNDERNEATH since you'll see them from the sides!*), but I like how it turned out!

The umbrella is two layers. I colored a toothpick with my black marker for a handle and mounted between the first and second layer so it looked like it was over his shoulder. I used my corner rounder punch to make the corners and the scalloped border at the top.

The sticker accents around the ribbon and along the bottom came from the same SU! Scrappin kit which was offered last year, as was the DP. This made a nice card base because the DP is cardstock weight and one sided so you have white space inside to write your message.

You had to have three little accents along the bottom for the sketch, and I noticed only after I added my little stickers it looked like he was hopping from one to the next, completely unintentional!(luckystamper) Reminds me of the cartoon songs "just foll-ow the bounc-ing BALL!" :)

Great quote: "Creativity is not a driving force. It happens. It creates itself and you have to be open." ~ Mayumi Oda, artist and writer