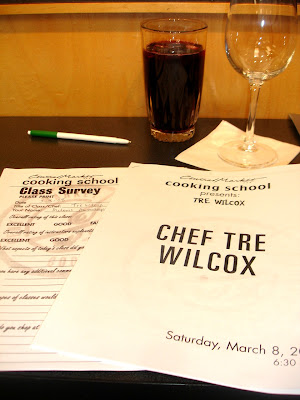 I loooove me some reality TV(my guilty pleasure) I like to think my taste in them are for the "high brow", and one of our (mine and Paul's)faves is TopChef on Bravo (new season just started!) Our favorite contestant from any season(and probably any reality show for that matter!)was Tre Wilcox, from this last season. He didn't win the title (took one "for the team", so to speak, on a team challenge) but was so talented and SO nice, I think the only contestant in reality TV history that never offered any dirt on or criticized his competitors, complained about the rules, or gave them anything they could edit in a negative way, just a NICE, stand up guy. So anyway, last week I was checking out at Central Market (the best grocery store ever!) and saw a little sign that TRE himself was going to be teaching a cooking class that Saturday in the store's kitchen /cooking school(which meant we'd also get to eat his food!) We had never taken a class there before, but this was one I had to mention to my husband as something I really wanted to check out!

We had an absolute blast! Our seats were right next to the cook top(I could've reached out and touched him (which I did later!) so we could see, smell, (get foam splattered on us!) and learn from the best. Here's me wavin' at ya in the mirror! 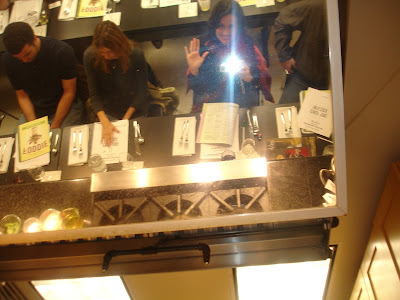 And here's Tre prepping before the class. 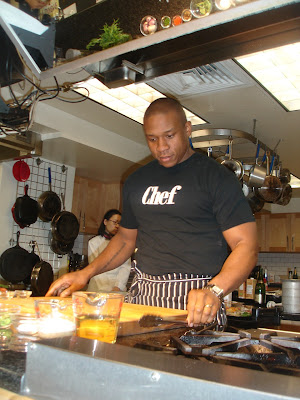 He was a chef at 5 star "Abacus" in Dallas before the show, and he now offers his services as a private chef (meaning he will do small dinner parties in your home, VERY cool!) and of course instruction like this. What an inspiration he is! Funny, driven and just loves what he does and making people happy with the food he creates (a tattoo on his forearm reads "gottahavepassion", isn't that great?!). We also got to bring home all the recipes he made, eat everything, sip some wine, ask questions(of which I asked the most, big surprise to you, I'm sure**) It was just great! He's coming back two more times in the next month, so if you get a chance, it was delicious, instructional, entertaining/funny all in one. I highly recommmend!***

And here's me**** and Tre, looking like best friends forever! (Edited to add: He emailed me back tonight after I sent him a heads up that I'd blogged about his event, thanking me for the kind words-aww!) 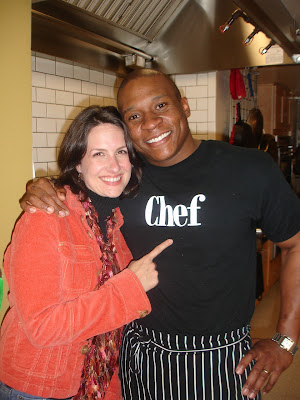 My husband said afterward it was one of the best date ideas I'd ever had! I think we have both have a little "cooking crush" on Tre now,(even more so than before!) We have his contact info(and you can find him on the web at www.cheftre.com), I just might have to send him a little card(maybe a tin?) blush!

* vs "lowbrow"! but I don't want to name any specific shows as being too silly for even me to watch and risk slamming any of your favorites! (cough!Rock of Love!cough!)
** NOT!
***And thought it SUCH a great value for the price, $50 a person, which includes the 2.5 hour class, meal, two glasses of wine, the recipes, MEET TRE!, and NO tax or tip! Next events with Tre are in Austin at Central Market April 10th and 27th, call 458-3068 to reserve a spot!
****in desperate need of a haircut! (and after my 2 glasses of wine)
PS The big glass of ruby-colored liquid in the top pic is NOT the wine!(hibiscus tea before the class, delicious)
Crafted with YOU in mind by Melanie at 3/15/2008 07:00:00 AM