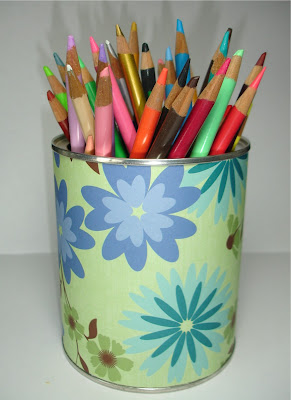 Edited to Add: Sneak peeks have begun! Tell me what you think of the new FREE set! (and sounds like you won't be peeking at my sets til probably Sunday! hang in there!)

I'm stamping up a storm for the release(with my new sets! and I am rocking out the cutest stuff in no time flat, it's just like I dreamed they would be!), but here's a 2 minute project I can show: it was time to get the Prismas out of their tin and into the open so I'll actually start using them! Guess what? these are my husband's! He used to be an architect, and these are his pencils from his studio days. I've never used them (I know, I know!) So anyway, I finally got to the bottom of the can of cocoa from Christmas(mmm, cocoa... you know, I just noticed the weight of the contents on the can in the pic: 1 pound. Yep, that's sounds about right. It went straight to my butt) I was about to throw it away*, and then I thought "wait, surely I can do something with this... hey, for my pencils!" So I wrapped a piece of DP around it and attached with sticky strip. It looks so cool now(and matches the walls of the office) and the best part, now it smells like *chocolate* in here! :) So look around! Anything you can beautify? I know you have extra DP! (This is the same DP from my tote, and I don't remember the brand, sorry! Do you???) 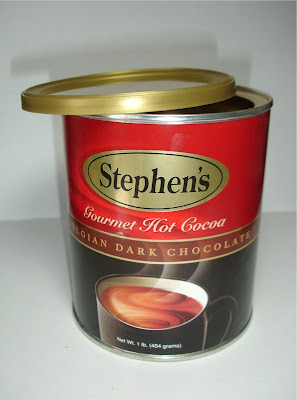 Lee writes:
Okay...........I totally think it's stamps ABOUT stamping and scrapbooking!!!!!! Is THAT it??? No "stamper" could live without and doesn't have yet???
No.
(And just for the record, I didn't go as far as saying NO stamper could LIVE WITHOUT them, BUT... anyone who doesn't buy them...will soon be jealous of everyone who has them. It's not good to be jealous.)
Angie writes:
Maybe you used the computer to draw stuff. And maybe they are kids since they are not animals, not flowers. Then again, maybe they are shapes... and words, to be used together. Hmmmm.....
warmer...
colder...
WARMER...
Stampmouse writes:
no hand drawn images how the heck can that be do you have someones dog doing them this time?? lol
Nah. I prefer not to have to split my profits. It's all me.
Jeanne writes:
I'm going to expand on Angie's idea. I think maybe it's shapes and words too, just like SU's Scalled (scalloped?) set and In my Thoughts (maybe in the stars is what she meant?)sets in the mini -- designed to work with the punches. Are we getting warmer? (no worries Jeanne, I make way more typos than this!)
Shapes and words...interesting...but that's been done before...(but not like this!)
"just like SU!'s sets": no. That would be like something. These are like nothing. ever. before!
No, they're not for punches.
but yes, in a way, you are getting warmer!
* which is not like me at ALL to throw something out(packrat), but I'm trying very hard to simplify my life!
Crafted with YOU in mind by Melanie at 3/07/2008 08:00:00 PM