Where Are They Now? Donna Baker

If there's one thing I've learned this past year (don't worry, I learned a lot more than that LOL!) it's to believe that anything that can happen. A neighbor recently reminded me on Christmas Day about my discovering at stamping my first SU! workshop ever 5 years ago, and calling her afterwards saying "THIS is what I'm supposed to do!" I meant just sit down and make cards, not make my own stamps, who'dve thunk it? LOL!

But more than that, I've found how the destinies of others can become entwined with our own in unexpected ways. Donna Baker (who later won my "Just So Hoppy" contest AND the tied with Bee for the fan favorite contest the next month with my tins!!) was the first friend I shared my secret I would be leaving SU! to design for Gina K. At that time she was demonstrating for SU! but not on any design teams (i wasn't either!) It was fun to share that new beginning with someone who loved stamping as I did, and as we both began testing the waters outside of SU! into "the big stamping world beyond" LOL! (Little did I know that just one year later, Donna and I would both be on Gina K's Design team together!) She really threw herself 110% into working with my stamps over the next year, and that really got her noticed by "the Big Lady"*, hee hee! Her story is one of passion and persistance, and I hope it inspires you today...make your dreams come true! 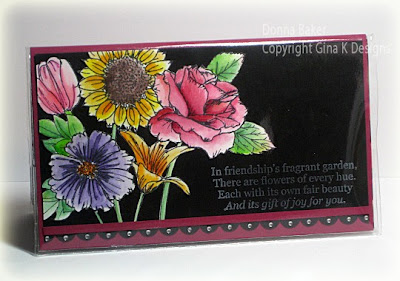 Here's a little more about Donna:
favorite:
Technique - Coloring (line art images)
Colors/color combo - Pinks, Chocolate brown
Type of project to make that’s not a card? Altered items & jewelry
Gina K set by Melanie: All of them! HA – All the Hip Hops
Gina K sets (from any illustrator) Take Flight (new one free with 3 by Gina K)
(I won’t put you on the spot and ask favorite stamp company, hee hee!) ;) I don’t mind answering this question at all; it is hard to say just one because I like to share my stamping LOVE with Gina K, Stamp a Sweet Impression, Starving Artistamps, My Favorite Things & Cornish Heritage Farms. SU! was my first stamping love but has taken a back seat to all these others – still hanging on by a thread!
Craft supplies I can’t live without: coloring mediums, Basic Grey paper pads & matching embellishments, cute stamps!

I've been stamping for about 6 years

The most important things I’ve learned about stamping/cardmaking/scrapbooking are to have fun & no matter what mistakes you make, they are usually fixable & a personal quote, “If it looks perfect it won’t look handmade”

Some of my stamping/crafting goals are to learn to solder & get published.

Some of my stamping/crafting accomplishments began in March 2008. After winning Melanie’s Just so Hoppy contest in March, Gina K asked me to be guest designer for October and in September she asked me to be one of her Senior Designers. In June, Jessie Rone asked me to be guest prettie girl for Paper Pretties for 3 months, and during July, Tracey Berkey of Starving Artistamps welcomed me on her design team and Taylor VanBruggen asked me to be on her first rotating design team for her new stamps Stamp a Sweet Impression. I have grown so much during this year & I am grateful for the many friendships stamping has played a role in bringing into my life. It’s been such a blast & I know the meaning of the phrase “When it rains it pours” but in a good way!!

Donna has offered to send this beautiful handmade 2 year planner made with "A Year of Flowers" and "Say it With flowers" to one of you! Leave a comment here letting me know about one of your own crafting accomplishments or goals, we wanna hear (and then you have to go make it happen!) and I will announce the winner tomorrow :)! (Don't forget to leave scroll down and leave a comment on this mornings post for a chance to win "And Then I Said', winner announced tomorrow for that tomrrow as well! )
* Gina K , although no one would ever refer to her as "big" LOL!!
Crafted with YOU in mind by Melanie at 1/02/2009 05:30:00 PM

Labels: A Year of Flowers, Gina K Designs, Say it With Flowers