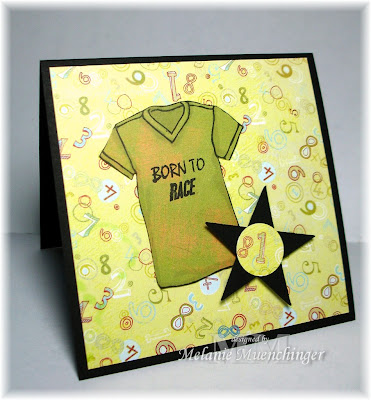 Here's a super simple boy card I made last month for a friend of my son's whose grandfather passed away, but I forgot to share it here. I wanted to have some mail for him to return home to after the funeral, but wasn't sure what kind of sympathy card would be appropriate for a 7 year old, having never made one before. In the end I decided to create something that would make think about things he loves and what a special kid he is. He already does triathlons for kids, so I stamped up this jersey from "Just So Sporty" onto some Basic Grey Cupcake DP (the name of the pack sounds so girly but it's got some fun "boy prints also like these numbers, bicycles etc which of course work for girls, too!) and added "Born to Race" from "Tee Talk". I traced the edges of the tee with an olive marker to give it some wrinkles and dimension, then cut it out. I found a number 1 in another sheet of DP in the Cupcake pack (which I also used for the background) so I punched it out using the SU! 3/4 in circle punch and adhered to a Fiskar star punch out (which is popped up on a dimensional.) His parents told me later he really liked the card. :)

I'm going to make some more of these for the 1000 Valentines challenge (please read the details and make some card if you can!), this design would be very simple to mass produce, great for boys of all ages, as well as for a number of occasions: masculine Valentines, birthdays etc. Julie says they really need cards for teenage boys at the hospital, so hope this gives you some ideas! Have a great weekend!