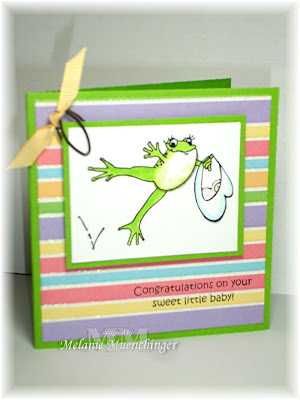 ... the frog is filling in! Yes, it's about time I started letting all my Gina K stuff mix and mingle!! Look how perfectly the little sling fits in his hand! Now I realize this makes the baby* he's carrying incredibly tiny, or the frog terrifically huge, but I'm fine with that! Frogs don't have eyelashes either, but they do in my world!


I covered the baby blanket with Stardust Stickles (to match my glitter striped DP) rather than choosing a color, this way I can send it out for a boy or girl when the occasion arises. I used a Sakura glaze pen on his eyes. (I just realized I forgot to give the image a shadow, doh!(oh well, I will later, but not taking another pic!) I chose to put the stripes going horizontal since he's hopping along, and stamped my greeting on the two colored lines, look how nicely that fits!

*I thought about coloring the little baby face green to match the frog, but a new mom might not really appreciate that...

** for the time being, I'm sticking with random.org. While I get what people are saying about how it "always picks in the middle", at the same time "the math person" in me says that it "always" picks in the middle because there are more numbers in the middle, while there's only one first and last number. So on some of these candy giveaways with let's say a 1000 plus comments, maybe 1 or 1000 has never been chosen, but probably also never 5 or 99 or 832 or whatever unless you've done 1000 giveaways to see...KWIM? I could be completely wrong here, though, it's been known to happen! Dad,(math major/genius/regular "Hands, Head and Heart" reader) can you help on this?? Either way, I STILL think you have a better chance with random.org than random.DH (who will guess the same number every time because he really couldn't care less about my blog candy results) or random.Jonathan who only counts up to 100 so far, and while he says numbers like "10,000 million!", I'm not quite sure he's completely aware of all the numbers in between, ya know? oh, and printing out and cutting up 200 strips of paper for a drawing? um, let me think about that...no. not for me. Sorry!

PS It always feels so quiet and lonely AFTER a blog candy winner is announced, so maybe you can leave a comment congratulating Lee, or about the card, or even vent about how you never seem to win anything before you go? pretty please?
Crafted with YOU in mind by Melanie at 2/28/2008 12:00:00 AM

Labels: Blog Candy, Gina K Designs, How Sweet it Is, Just So Hoppy