Jonathan is sick now. :( Good thing I went to bed early because it turned out to be a long night of changing sheets, etc. So maybe not much stamping the next couple days, but we'll see. (You can bet though I will be calling in the reserves to relieve me when all the new release stamps later this week so I can get some serious stamp on for the Gina K Designs Sneak Peeks this weekend for our release on the 20th next week! I am SO EXCITED about it!!!)

But here's a pic of Jonathan and I at his kindergarten round up recital last week. 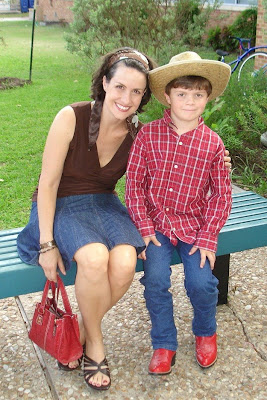 We had to go thrift store shopping to get his outfit together(no, not everybody dresses this way in Texas!) Paul grimaced when he saw the boots we brought home and asked, "Can you turn down the color on those with your Photoshop??" Um, no, we canNOT! (look how well they match my purse!) And fortunately the other little boys in Jonathan's class backed me up, when you're 5 everyone wants their boots to be red, hee!

And here's a gift from Jonathan I've been meaning to share: remember when I promised another easy jewelry tip? Make an earring (that's lost it's other half of a pair) into a pendant by adding a jump ring or twisting the french hook into a loop you can slide a chain through! 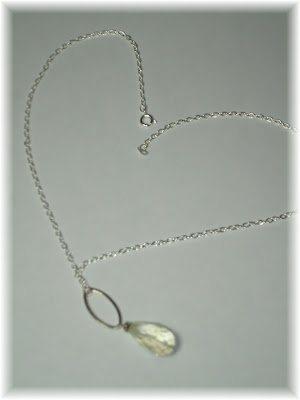 A few weeks ago he presented me with this treasure: a dangle earring he found at the playground (upon inspection, it appeared to have been separated from its owner quite awhile ago from the dirt that encrusted it, so I felt okay with letting him keep it) After cleaning it up, I took the french hook off and bought a $2 chain from Hobby Lobby that I felt would complement my new pendant and threaded it through. (That long loop was part of this earring's design so I didn't have to add anything to make it work!) He puffs up with pride now anytime he sees me wearing his find. When I have time, I'll be digging through my jewelry box to see if I can find any of those little lonely "only" earrings I could never bear to get rid of (packrat that I am, in hopes that I might find its partner again, fat chance) to see if I can turn trash to treasure! How's that for recycling?