Flake in a Flash!

This minimal card was made using the Star Nestabilites, that I just had to have, but haven't used much yet, because while I'm very glad to have the capapbility to cut and emboss large and small stars, they lend themselves to certain types of cards, KWIM? So I was trying to think out of the box about some different ways to use therse stars... and stamping with Rupa's snowflakes the other day gave me an idea: may I present to you, the STARBURST!! 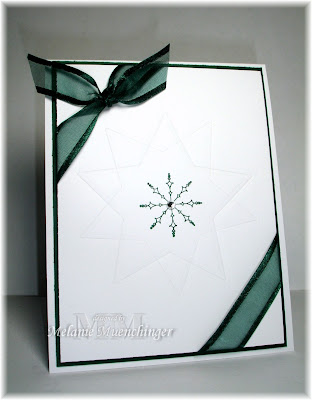 I love how these two 5 point stars when layered create this really intricate-looking pattern!!

Start embossing one star die, choose the size you want. After removing the die, turn the die so that the points now line up in the middle of each star arm, as shown above, and emboss. You can create some different nested looks by varying the size of the star die for your second (or even third layers) but here I used the same one. Because they are offset, you must emboss one die at a time, do not attempt to stack them like this and roll through together!! I stamped a single snowflake in the middle in Handsome Hunter with one adhesive rhinestone in the middle and wrapped my matching Gina K Pure Luxury Ribbon around , ta da!! How's that for simple elegance?! 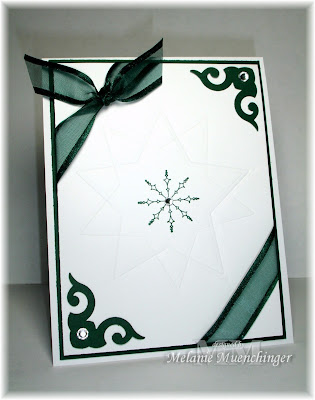 I decided to add a kicked up version with two punched fancy corners (bejeweled with one rhinestone each to match the flake) My husband actually really liked both, which is saying something, 5 thousand cards later, he's a bit numb to them all now! For him, usually the plainer the better, but he also liked it with the punched corners...) Which do you prefer?

Window on the Water